Firelei Báez, Not Even Unalterable Limitations, 2012

Follow us into the mysterious world of Firelei Báez, a world teeming with color, where time and space are suspended in a fantastical limbo.  Where does this world exist? Is it an eden that lives only in the dimly-lit corners of our memory?  Báez, a Dominican born artist known for her intricate works on paper and large-scale sculptures, often explores concepts of subjectivity and femininity in diasporic societies.  Here, she uses radiograph and opaque ink on pigmented abaca, cotton, and linen based sheet to play with finer, more delicate lines and broader strokes. The loose, petal like strokes in the piece evoke a sense of expansion that pulls the viewer into the enigmatic world that Báez has constructed.  There are suggestions of eyes, a head, and a body in the centralized form, but Báez chooses to keep the identity of this opaque figure hidden.

Is this figure real, or simply a figment of the artist’s imagination and memory?  Although we can distinguish the soft curves of feminine bodies on the right side of piece, the subjects remain vague and dream-like, almost like a memory.  This abstract portrayal of form and space blurs the boundary between reality and the illusory nature of memory. 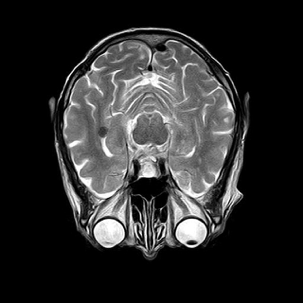 The MRI has become a staple of modern medical imaging. With the ability to look inside the mind, doctors can accurately provide medical diagnosis and follow up procedures. However, American artist Kiki Smith drew inspiration for her anatomical works from the famed 1858 medical textbook “Gray’s Anatomy,” from which the hit ABC television show derives its name. Contrasting both the gory anatomical illustrations of the textbook and the detailed imaging of modern technology, this two-layered rubber print provides a simplified yet distorted view of the brain.

The two print colors, red and blue, parallel the medical representations of veins and arteries found in anatomy textbooks. The prints’ offset placement creates a layering effect that affords the viewer a perception of movement, as if one is moving through the levels of the mind. These differences in color and placement of the stamps create a dynamic perspective of what we’re made of. In this way, Smith allows us to explore inside the mind, creating an appreciation for the unglorified view of what lies inside us all.

Imagine having never seen a rhinoceros, and only having heard of it in legend. How would you draw it? This print is the first glimpse of the beast for most of Europe and was used a model to illustrate a rhino for two centuries after its creation. German Renaissance printmaker, Albrecht Drürer, first heard of the Rhinoceros when a friend wrote him a letter describing an Indian sultan giving one to the King Manuel I of Portugal during a diplomatic exchange in 1515. The King then sent it to the Medici Pope Leo X as a gift to curry favor, but the ship carrying it sank, taking the rhinoceros with it. Drürer never saw the beast, but heard of it in letter and tales, inspiring him to make a woodcut in what he believed to be its image exaggerating the armour. This woodcut is one of 250 that Drüer made in his lifetime. It is still a widely used and celebrated print to this day. While this print is not one of the originals, it is nearly contemporary, being printed in 1620. It is remarkably lifelike, given the constraints Drürer operated under. Often an artist’s personality is projected through their own artwork; style, palette choice, and perspective act as a medium for the artist to convey their values and view of the world. As for American artist Edmund Lewandowski, the mastermind behind Blast Furnace, the artistic movement in the mid-1920’s known as Precisionism served as such a medium. Precisionism placed emphasis on depicting industrial and architectural subject matter with crisp contour and sharply defined geometric shape. Having spent four years of his life working for the U.S. Air Force as a cartographer and a camouflage artist, Lewandowski was all too familiar with the values of Precisionism and used them in order to embed his identity in his artwork. Evidently, the most impressive aspects of this painting are the strikingly smooth and straight contours of the furnace and the smoke stacks. His color choice, while seemingly bleak, speaks to the prominence of industrialization in his hometown of Milwaukee, where dull factories and somber smokestacks were nothing but common. Lewandowski’s exemplification of his character through Blast Furnace provides an insight available through no other medium just as a canvas provides the ideal environment for an artist to convey him or herself. This striking bronze sculpture is not what it initially seems. At first glance, the piece looks like something akin to a net, cast in bronze. However, American artist Michelle Grabner used something much more unique than a simple net in her work. She cast handmade crocheted blankets in bronze, turning something soft and warm into a piece of art that is hard and incredibly sturdy. A monument instead of an item of comfort, this unnamed piece defies the traditional use of a blanket and immortalizes the original crafter’s work. Despite the ease of making multiple copies through casting, Grabner maintains the individuality of the original by only making a single version of each sculpture. This mimics the uniqueness of the blanket, as well as the effort the blanket’s maker put into the piece. Grabner’s body of work tends to focus on the idea of womanhood, and this piece, placed in the heart of the “Innovative Approaches, Honored Traditions” section reflects this. This unnamed sculpture demonstrates the paradox present in womanhood. One needs to be both soft yet supportive, flexible yet sturdy, warm yet enduring. Grabner catches this all, if you are willing to let yourself be enveloped by the inherent contradictions in her piece. When in Rome, Make Art as the Romans Do!

This fountain topper marks a special place among New York and Italian artist Elihu Vedder’s works. Initially a painter, Vedder began exploring new media and turned to designing decorative objects in 1881. Around the same time, his career led him to Rome, an epicenter for the arts in the Western world. There, he collaborated with Charles Keck (1875-1951), another American artist, on a series of sculptures.

The Boy is the largest and perhaps most impressive byproduct of Vedder and Keck’s collaboration, a masterpiece of ancient Roman inspiration. Cast in bronze, it stands at nearly four feet between the boy, the basin overhead, and the screaming ram base. The impact of the city comes through in the base. Modeled after traditional Roman oil lamps, it calls viewers to dream of a bygone era. Sinister and unnerving, the ram demands attention, but the boy, balancing deftly atop it, commands mastery over the beast. Curiously, the artists originally sculpted the boy unclothed, but later added sparse garments, perhaps in order to juxtapose his modesty with the shock of the ram. Gaze at the innocent water-bearer and glean his secrets of pacification; use them to calm the masses at wild Hamilton parties.

Did you find them?

If you didn’t, here’s a clue!  One figure begins with its arm as the right ear.  The other figure begins at the left edges of the man’s hair.

American artist Alex Brown uses distorted and pixelated images as inspiration and reference for his paintings. On the surface the technique is similar to the method used in Magic Eye images. However, a key difference is that while Magic Eye images use patterns to create 3D models, Brown uses a single image as the backdrop, and manipulates the image’s details to create hidden figures or structures in his paintings.

Brown has two styles typical of his artwork, which he describes as organic and geometric. This painting, “German Jamaican” is an example of one of Brown’s organic paintings. Brown considers most of his paintings to reflect some part of himself that he is hiding as “schmear or camouflage.”  In “German Jamaican,” he hides two figures by blending them into the the man in the painting. Brown believes that both images “end up informing each other.” Therefore, both images provide insight into Brown’s mind and not just the hidden figures that you must squint to see. “Amidst the future and present there is a memory table,” by Firelei Báez

When was the last time you considered ‘twerking’ akin to artistry? Dominican artist Firelei Báez draws inspiration from behavior considered to be antinormative (opposing standard behavioral norms) for modern women, with twerking videos on YouTube providing source images for her craft. Throughout much of her work, Báez engages with the feminine body: how it is perceived and used to challenge social hierarchies. This focus on dynamism of the body carries through the handmade paper series from which this paper piece is taken. The role of black women in Caribbean culture is emphasized, while Báez also employs scrollwork and elaborate ornamentation of Persian miniatures and European manuscripts. Báez began by forming landscapes, but moved to representing features of the body as she found paper to exhibit the nature of skin, a medium she refers to as the “surrogate self.” In this multi-color piece, she uses marbling, a traditional papermaking technique unique in that it incorporates bodily gestures in the physical creation of the work. Although ‘twerking’ may not be what comes to mind when you view Amidst the future and present there is a memory table, the human body and its expression of creativity is clearly captured throughout the piece.

Your responses to the museum label assignment will appear here after posting. If your post does not show up, there is an error, or you would like assistance, please email Kyle Burnham, Educational Technologist (kburnham@hamilton).